“Welcome to hell” – Riots in Hamburg 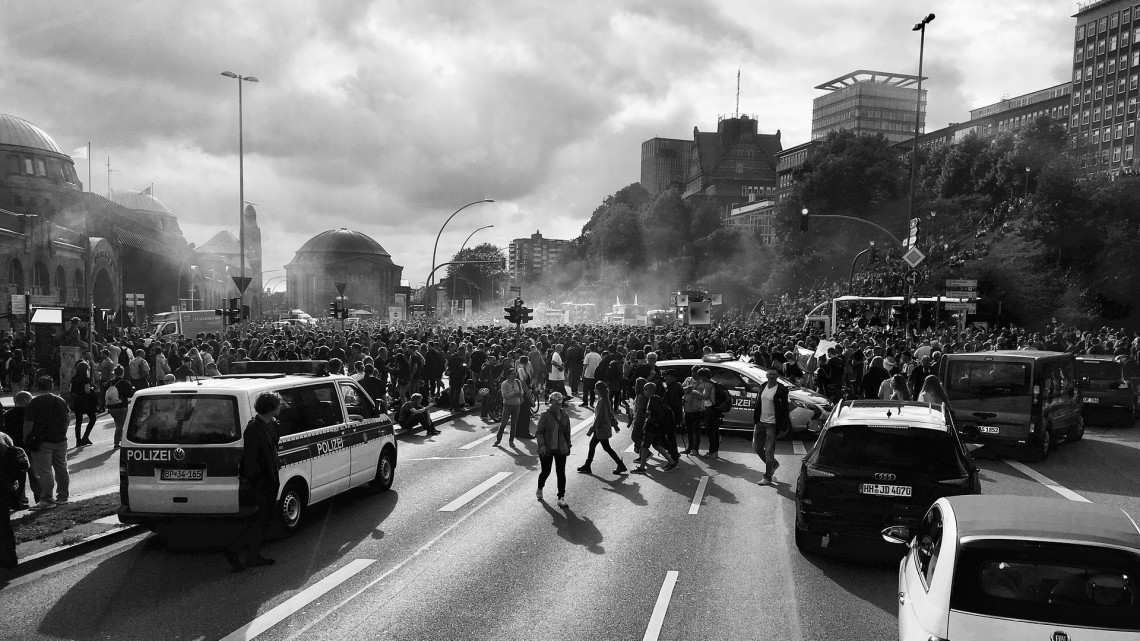 As expected, the riots in “Schanzenviertel” continued on Friday night. For four hours, masked autonomous extremists were raging in this area of Hamburg. Press and TV pictures show burning barricades and destroyed ATMs, to hold police forces out of the area. The day after shows a view of complete anarchy, supermarkets and drugstores were broken into and robbed, and completely demolished afterwards. Paving stones were ripped out of the ground by the 1500 extremists to be used as weapons, but also for other streets barricades. The police let this happen, with trying to put out the fires with water cannons. While this happened the local residents looked for protection in pubs or at home.
Somewhere around midnight, police forces changed their strategy. Police helicopters flew over the area, hundreds of police cars moved into the blocked area, where the extremists where hiding. Heavily armed police forces stormed the buildings where they suspected violent protestors with Molotov cocktails and other weapons. After a couple of hours police gained control over the area, with approximately 200 injured police officers, and about 100 protestors arrested.

In the morning police forces, firefighters and volunteers started to clean up the remains of the riots. In the afternoon 10.000 people formed a peaceful demonstration against the G20 summit. According to Hamburg police, there are also some masked “Black Block” activists, the police has to action against.

This weekend, the heads of state of the G20 members are meeting in Hamburg, Germany to discuss about global problems, like counter-terrorism policies, sustainable development and dealing with the European migrant crisis. In addition, the G20 summit is the first possibility for US President Donald Trump to meet Russia’s Vladimir Putin. But due to huge demonstrations and riots, this political encounter became a side stage.

Since Thursday night, the German city is at a state of alert. The planned and organized demonstration, with its martial name “Welcome to hell”, against the G20 summit, capitalism and oppression, and the political and economic elite, started rather peaceful. After just a hundred meters, police stopped the demonstration, because a couple of hundred left-wing extremists formed out of the otherwise peaceful group. After standing in front of each other, the situation escalated. Police units wanted to separate the extremists, by splitting them up with water cannons, which resulted in more violence from the protestors. It is not clear what side caused this escalation, but the militant part of demonstrators clearly wanted an open confrontation. With the police attacks the demonstration “Welcome to hell” was officially over – but this marked the beginning of a long night with burning cars, destroyed shop windows, and dozens of injured demonstrators and police officers. Pictures of masked men walking through the streets setting cars on fire, and the resulting black smoke above the city are dominating German media. Eye witnesses describe the situation like being in a war zone, with burning roadblocks and torn down street signs. The riots continued through the night, and caused delays in the G20 summit’s schedule. For example, First Lady of the United States Melania Trump could not leave her hotel, due to security problems on the streets. Of course, the violent protestors are just a small percentage of an otherwise mostly peaceful demonstration group. There are people who want to show their resentment with the politicians and the G20 summit in a quiet and peaceful way, like they are entitled by a democracy. The left-wing extremists wandering around destroying the city should be persecuted by law, since they are not following the rules of democracy at all.

An end of the riots is not in sight before the end of the weekend. It remains to be seen, if the political leaders can continue their meetings without any major disturbances. Meanwhile, Police of Hamburg ordered support, since the actual number of violent protestors is higher than estimated before. The next two days and nights will probably be even more violent than the last one.

After the summit the tension starts to rise