Germany needs a Pro European France at its side 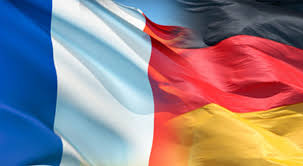 On May 8 the Victory in Europe Day, V Day, was celebrated. 1945 Nazi Germany signed the unconditional surrender to end World War II, and thus determining the end of fascism in Europe. Over 70 years later, Emmanuel Macron has won the presidential election against far-right nationalist Marine Le Pen last Sunday, on May 7.
The victory by the social-liberal candidate was an important step against populist movements, like the election of Donald Trump or the Brexit referendum. Like the elections in Austria and the Netherlands already have shown, the European people still hold on to a united Europe, by not giving their votes to Europe-sceptics. The new president of the French Fifth Republic positions himself as a clear Pro European. At his victory rally at the Louvre on Sunday night, the European anthem “Ode to Joy” was played, even before “La Marseillaise”. Macron’s plans for the European Union involve a common European Finance Minister, as well as a new European economic policy.
Among German politicians there are concerns, regarding new European policies. European Commissioner for Budget and Human Resources, Günther Oettinger does not agree with Macron’s reformation ideas, because current institutions like the European Stability Mechanism are working the way they should. His party colleague Jens Spahn, also conservative, considers that the indebtedness of the European Union must not grow. The liberals on the other hand, argue that it is the duty of all Europeans and democrats to help Macron being successful in his presidency. As one of the Vice Presidents of the European Parliament, Alexander Graf Lambsdorff mentions, a strong France can take weight off Germany’s shoulders in a struggle for a closer European Union. The liberal party, the FDP, seems very contented, that another liberal candidate has won an important election, after Mark Rutte in the Netherlands. As there are federal elections in Germany in the fall of 2017, this is an important aspect for market-liberal policies.
Martin Schulz, candidate for chancellor for the Social Democrats, sees the new French president as an “unique chance” for future common decisions. It remains to be seen, if the the social democrat candidate can triumph over current Chancellor Angela Merkel. Instead of Frexit, as Marine Le Pen would have started her hypothetical presidency, Macron carries Merkel’s hope of a common Europe. Even though the current German government is strictly against more Eurozone bonds, Angela Merkel will benefit from Macron. The party leader was constantly in the focus of criticism in German political landscape. The outcome of the French election and two victories for Merkel’s party CDU in state elections in Germany, have improved her standing for the next months. If Merkel wins the federal election this fall, she will have a partner that stands beside her for stronger French-German relations, but also for a united Europe. And as V Day was the start to a new Europe, 2017 is a decisive year for the European Union’s future.